The Mouse That Saved Christmas

A bilingual (SPANISH AND ENGLISH) children's book for ages 3-7 that contains 32 pages, with full color illustrations by award-winning professional Rosemarie Gillen on 27 pages. In glossy cover paperback. The book tells the story of a mouse that sees Santa's gift bag near a fireplace on Christmas Eve. The mouse unwittingly goes into the bag for candy and gets swept up when Santa grabs the bag and puts it on his sleigh. They ascend into the sky and Santa soon discovers the mouse. He says the mouse is eating all his candy and must be let off at the first house they visit. The mouse says he can be more useful than Santa might think. When Santa's lead reindeer Dasher gets something in his eye, the mouse has his opportunity. The sleigh has started to careen recklessly though the heavens. The mouse scampers out on the narrow reins in the cold and wind and gets the piece out of Dasher's eye. The sleigh is now righted. Christmas has been saved for all the children. At the first home the mouse is left off by Santa, who gives the little creature a reward and lots of praise. At the end the mouse is in a warm house watching the sleigh ascend in the sky. Santa calls out "Merry Christmas" and tells the mouse, "You saved the day!" This is a heart-warming story that will be inspiring to all children who love little animals and identify with them. It is also an easy and enjoyable way for any child to start learning a new language. 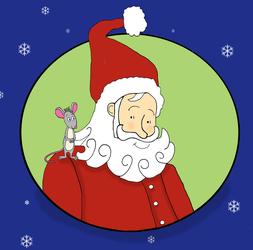