a book  in Spanish and English would be wonderful for children that spoke either language. Many English-speaking American children are learning Spanish now and many Spanish-speaking children want to learn English. Isn’t a story a great way to learn? Most of this book is dialogue so it’s really about speech. The Mexican and Spanish Christmas tradition is more the celebration of Three Kings Day on January 6, but I have learned there is also a Santa tradition.

Q:  Does the mouse know who Santa is?
The mouse actually thinks Santa is sort of a crazy guy.

Q: What was your favorite children’s book?

My favorite was The Five Hundred Hats of Bartholomew Cubbins by Dr. Seuss. I was entranced by this book and used to read it over and over again.

Q: Who did the illustrations?
Rosemarie Gillen, a well-known illustrator, did the drawings. Her Santa is warm and friendly and not too patriarchal, which I like. He even loses control of his sleigh.

Q: Why do children like reading about mice?
When you look at them, mice are cute. I think children identify with the little creatures. 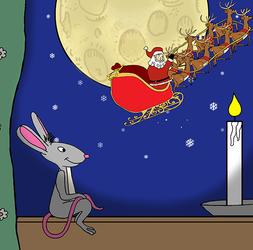 Q: Where did you get the idea about the mouse saving Christmas?
It just came to me shortly after the holiday this year (2015). I have a friend who draws a Christmas card every year with funny mice on it. His name is ‘36’ because that was his phone number when we were toddlers. Mice have always been favorably associated with this holiday. I could just picture a mouse scrambling into Santa’s bag and munching on some nuts or candy. And then I thought, What would happen next? The story just rolled on from there.

Q: Why did you put the book in Spanish as well as English?
So many children in the United States today speak Spanish as their native language. I felt